Koprinka Chervenkova: Borisov Fears the Stray Bullet that Awaits Him

"The protests scared the government a hell of a lot. This is not a little. Borissov is terrified to death, but not with the possibility of prosecution. That covers a lot of ground. He bargained for it with some guys. He's afraid of the stray bullet waiting for him. He fears he will be physically dead.” This was commented by journalist Koprinka Chervenkova to BNR.

Koprinka Chervenkova clarified that Borissov has grabbed power because he thinks it is protecting him. And it surely is. Power gives territory in which you can manoeuvre, make bargains,  make deals. However, his territory has been severely narrowed", the journalist added.

According to her, the protests are already tired, "but tired, or not and while going on, Borissov will be trapped in the deadlock he pushed himself into." "The only move to survive is to convene the Grand National Assembly to extend his stay in power. He has the chance to count on the protest to shrink. The protest has specific and clear demands - Borisov to go along with the chief prosecutor," she said.

According to Chervenkova, redressing the situation is complicated. "The only way to get rid of Borissov is an internal coup, staged by his people," the journalist said. 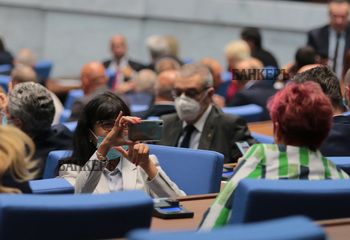