Is There a Political Future for the "reborn republican" Tsvetanov?

The former "second" in GERB Tsvetan Tsvetanov stepped up to realize his political project "Republicans for Bulgaria". Last weekend, he presented the initiative committee, and on Sunday, September 27, the constituent assembly of the new formation will be held.

The question is, what will it be? Will it be a second revised, improved and supplemented edition of GERB, i.e. GERB-2, or will it be something different? Tsvetanov's ambition is to establish something new. Some kind of a break with the past and preserving, in fact, the good features of the early stages of the Prime Minister's party. "Republicans for Bulgaria" will be an amalgam of his cadres, brought and promoted to GERB, his friends or people with whom he established strong contacts while occupying the previous high party positions. They will also be joined by those who are right-wing but have never been members of a political organization before.

can Tsvetanov put aside his past in GERB,

can he clear from all the stains stuck on him during these years,  resent his biography,  be reborn and  stand all in white to bring change? People in Bulgaria, however, do not have short-term memory. The spectacular arrests in operations named after judges are still remembered during his time as Deputy Prime Minister and Minister of Interior in Borisov's first cabinet. The fabricated accusations and custom cases, which then crashed in court.

Tsvetanov must also give explanations as to why he was convicted in two instances for illegal wiretapping and the third instance acquitted him when GERB returned to power. Why was he the permanent head of GERB's pre-election headquarters, even though he was the deputy prime minister at the same time? Is the expression "Tsvetanov's election machine" accidental? After all, he built this machine, which fabricated electoral manipulations and forgeries...

Let's not forget and

and why he was actually forced to leave his posts in GERB and in the state. The same person now explains that the elections will not be fair if GERB conducts them and that it is better for the president's office to organize the vote (yes, yes, the same president who was accused of lobbying, betrayal, serving a foreign country in the discussions what kind of fighters should be bought for the Bulgarian Air Force).

"The public assessment is that this government has exhausted credibility in the policies it is pursuing. The democratic community demands the resignation of Boyko Borisov, which automatically gives a very clear sign that in a subsequent management term a cabinet could be made and, whatever the configuration of those involved in it, at least one person will not be prime minister – this is Boyko Borisov", says Tsvetanov.

Moreover, Tsvetan Tsvetanov believes that he can unite everyone in the center-right space, regardless of the

heavy luggage he carries on his back.

He is confident that more members and supporters of GERB as well as other people will join its Republicans: "There are many people who feel offended because they fit into the common denominator that GERB is the party which has to go away from the political horizon ... If all these, not only from GERB, but also from the center-right of the political spectrum, democratically thinking Bulgarian citizens, recognize our goals, we are ready to unite our efforts, because jointly we are stronger than singly. "

Tsvetanov will probably have a problem with the local staff, because they may be his men, but some of them are compromised. It is true that there are many offended and underestimated by the central leadership members of GERB, but they themselves do not have an impeccable reputation. There is no way to launder their biographies and build something new with these people.

no matter how much it has failed. In fact, after Boyko Borissov's first term, there was already an attempt by his confidants, who had fallen into disgrace, to create a new formation.

Most political observers are skeptical of Tsvetanov's new party. For some, this project is a political adventure without any real chances. 'We don't know how much he will lean on the old networks and how much they will be able to energize the people. In the coming months, after the new persons are announced, we will see to what extent there will be a break with GERB ", Evelina Slavkova from “Trend" pointed out.

However, Democratic Bulgaria has already stated that they do not want to have anything in common with.

Dobromir Zhivkov from Market Links thinks this is an interesting experiment. He described it as a new political request from a man who was involved in corruption schemes, but "Republicans for Bulgaria" has already had new values.

According to the social psychologist Prof. Lyudmil Georgiev from Sofia University, the emergence of a political formation of the former "second" in GERB Tsvetan Tsvetanov may well turn out to be "a big game targeted after he was removed from the ruling party". In other words, Boyko Borisov must have secured his

for the next term of office.

Tsvetanov himself, albeit half-heartedly, did not deny the possibility of his new party forming a coalition with GERB.

Political scientist Parvan Simeonov from Gallup also thinks in this direction: "Tsvetan Tsvetanov will prove to be a difficult test not only for GERB, but also for Democratic Bulgaria, because he enters their political space. He does not deny the poss one day ibility under certain circumstances to form a coalition with GERB. Hopefully, one day, the doors between him and Borisov may open. Tsvetanov can take his revenge and the political destiny of GERB can depend on him, "Simeonov pointed out.

Despite the assumption of such options, Prof. Georgiev, however, believes that "Tsvetanov was done as a politician a long time ago", given his being the second person in GERB and his connection with a lot of vicious practices in this party, as well as its management of the country.

Evgeniy Daynov: The Counter-Protest Relies on the Authorities, Hence It Is an Aggressive Phenomenon 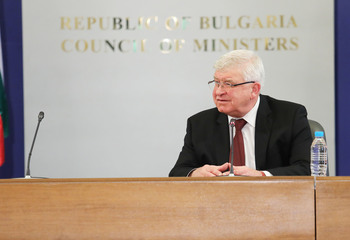