Borissov's Three Cabinets Are a Stalemate, Doomed to Fail

No reforms have taken place, no strategic action has been taken, no proactive growth in socio-economic development has been achieved in the last 10 years. Here comes the comparison with the last period of the totalitarian regime, when there was a talk of imaginary stability while everything was crumbling. It is driven with palliative and often unjustified ad-hoc measures. Stagnation and status quo are the words that characterize these years. This was stated in a video interview with “The Banker Studio” by the former Deputy Prime Minister Lydia Shouleva, Minister of Labor, Social Welfare and Economy in the government of Simeon Saxe-Coburg-Gotha.

In economic terms, the 10-year rule of GERB is a support for the status quo. There was a mantra at that time to maintain stability, in other words, to keep without abrupt movements the achievements of previous years of growth.

When I was Minister of Economy (2003-2005), foreign direct investments were between 28% and 32% of GDP and the country was not yet a member of the EU. Now they can't reach 1%. The comparison speaks for itself.

The main reason is the lack of a legal order that breeds corruption.

We are talking about poverty, unemployment, social problems but we have not realized for a long time that the root of evil lurks in the lack of justice. This is the cause of poverty in our country.

Not a single business can grow calmly and confidently without fearing it could be embezzled. Nor will a foreign investor come to fight administrative barriers.

GERB was lucky that as soon as it came to power, the money under the EU programs from Brussels, on which our economy mainly depends, began to pour in. The lack of a legal order has allowed the emergence of concepts such as the "success fee" and other ways of absorbing these funds and obtaining public contracts.

Sarkozy has personally told me that France does not agree with Bulgaria having a 10% flat tax, because in this way we can attract their investors and labour force, which is unacceptable to French voters. 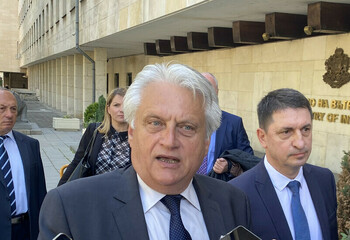