A new claim against seven former executive directors and employees of SIRBANK, closed in March 1995, has already been placed at Sofia City Prosecutor's Office.
On August 24, 2000 the Specialised Investigation Office sent a claim against SIRBANK to the Prosecutor's Office. Investigators have arrived at the conclusion that Milka Stefanova - Chairman of the Board of Directors, her deputies - Ivan Kalvachev and Nikolay Pavunchev and Ilian Zafirov, Foreign Currency Operations Director should stand before the court. According to the investigators, they have launched non-collateralized credits, thus breaching the bank legislation and incurring losses to the bank amounting to BGL12,122,983.546.
On November 3, 2000 the Prosecutor's Office returned the SIRBANK case for further investigation, requesting Chavdar Goranov and Peter Kovachev - credit inspectors of the bank as well as their manager Georgy Patev - chief expert at SIRBANK's Credit Department, to be also convicted.
Taking into account this recommendation, the Specialised Investigation Office has made up a new claim, which was sent to the Prosecutor's Office on january 8, 2001. According to this claim the above mentioned bosses and employees have approved the launching of sixteen bad debts, thus incurring losses to the bank, amounting to BGL13,865,783.830. 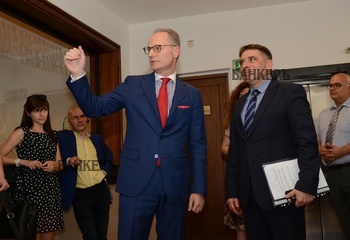