EUR10MN TO BE RELEASED BY PHARE FOR HI-TECH PARKS

The Ministry of Transport and Telecommunications is launching a project worth EUR10MN for setting up hi-tech business incubators, to be financed by the European Union's PHARE Programme, Deputy Minister of Transport and Telecommunications Nikolai Nikolov announced. He accused the former management of the Bulgarian Telecommunciations Company (BTC) of not beginning its restructuring and developing additional services, business with mobile telecommunciations, and voice transmission via INTERNET. The BTC has not done anything in the last two years to prevent thefts of telephone traffic, Mr. Nikolov added. According to him, the national telecom's employees should be around 16,000. However, some 25,350 are currently on pay-roll at the BTC nationwide. From the date of assuming office, the Ministry of Transport and Telecommunications's team has worked out four draft bills, connected with Bulgaria's intergation into the European Union. The drafts are for amendemnts to the Telecommunication Act, the Road Traffic Act, The Act on Automobile Aransport, and the Act on Rail Transport. 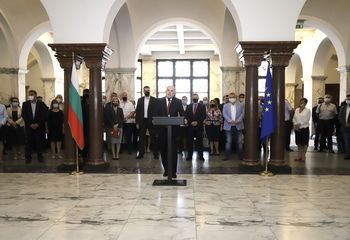