According to representatives of ecological organisations, the sulphur dioxide emissions over Stara Zagora and its region over the last year have flatly proven the lack of a civil society in Bulgaria and the lack of concern on the part of rulers. That is why local people decided (as did citizens of Rouse 17 years ago) to fight themselves for their rights. Late on the evening of July 18 a meeting was called in the town under the slogan Let's stop the ecological genocide, prosecution for the culprits for the pollution, attended by hundreds of local citizens. Lawyers from the National Electoral Union were collecting in front of the town-hall civil claims against the State from people who believe they had suffered from the clouds of sulphur dioxide. A day later the protesters sent an ultimatum to President Georgi Parvanov and to the 11 MPs from the region, demanding to officially announce the names of the culprits for the pollution and indict them within seven days. If that is not done, they will proceed with civil disobedience and will close the roads of the region. If the pollution is repeated (no matter when) the citizens of Stara Zagora will deprive the deputies of their trust and will demand their resignation. It is not clear how President Parvanov could speed up the inspection for which Parliament set a 30-day term. It si still more improbable that his team would initiate indictment. However, it is certain that the sulphur dioxide clouds over the town may become one of Bulgaria's biggest problems on its way to the European Union (EU). An open letter from the deputies of the European Parliament, addressed to ministers in resignation Dolores Arsenova (Minister of Environment and Waters) and Miroslav Sevlievsky (Energy Minister), was made public on July 18. The letter insists for undertaking urgent measures to prevent the consequences of the most recent gas pollution on July 10, 2005. The letter is dated July 14, 2005 and is signed by the German representative of the Greens group, Ms. Hiltrud Breyer who approached the European Commission (EC) last month about the gas pollution of Stara Zagora, and by her Dutch colleague Els de Grun, who wanted to hear the stance of the EC about the concession of the Trakiya motorway. It also became known during the week that the letter of the EU deputies was sent on the same day when the EU Commissioner for Enlargement Olli Rehn was replying to an earlier interpellation by Ms. Hiltrud Breyer about the sulphur dioxide pollution from the Mritza Iztok energy complex. In that connection Mr. Rehn pointed out that Brussels will intensively use its instruments to monitor Bulgaria's progress in the introduction and application of the EU ecological requirements. These requirements are in fact explicitly stated in the pre-accession treaty, signed by the Cabinet of MP Simeon Saxe-Coburg-Gotha two months prior the elections. The treaty and the other documents include a series of measures, intended to clean the air over the big thermoelectric power plants in Maritsa Iztok. This, however, could not be made within a week, a month or even a year. It can happen only after 2009 when the last sulphur purification installation will be established in the complex under the approved investment programme. It is the local thermoelectric plants that are to blame for the sulphur dioxide cloud over Stara Zagora, according to officials from the Ministry of Environment and Waters. Eng. Shteryo Shterev, executive Director of the Maritsa Iztok Mines, shares the same opinion. In front of the municipal council of Stara Zagora he specified that the coal that burn in the power stations have a high sulphur content, but in recent years the quantities used annually have decreased from 27 to 20 million tons. The pollution is felt some 3-5 days in a year, at that when the meteorological conditions are specific, e.g. low atmospheric pressure, high humidity of the air, and wind speed of 1m/sec, blowing from the power plants, Mr. Shterev specified. His proposal is to build a meteorological station in the town to forecast such conditions. Eng. Penka Nacheva, head of the Regional Ecological Inspection, also confirmed the reasons for the pollution, quoting satellite photos. Many of the municipal councillors, however, accused the military range near the Zmeevo village, which is some 10 km north of the town. They insisted on making an evaluation of the impact of the military field on the environment. Its head, lieutenant-colonel Dechko Kolev flatly rejected the accusations, explaining that no ammunition and materials containing chemical or other dangerous substances have been destroyed on the range. The ammunition tested there does not even have any sulphur content. Monthly losses will amount to millions of euro if the field stops operations, and tests will be probably moved to another place, lieutenant-colonel Kolev pointed out. He sees economic interests behind the accusations against the military range. According to rumours in the town, there are appetites to build a cooperative for hunting tourism on the location of the test area, which has a good infrastructure and two villas that could become more attractive by a small investment. 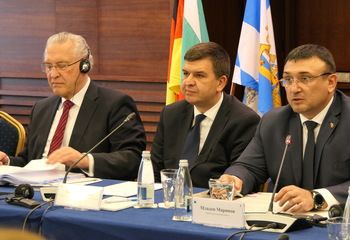 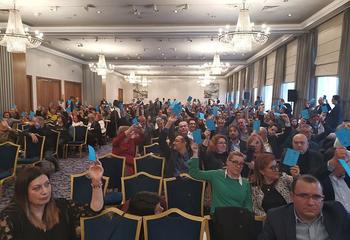