EBRD SOLD ITS INVESTMENT IN MEDICA

The European Bank for Reconstruction and Development (EBRD) and the Czech Fund Europa Capital Management (ECM) withdrew all their investments in the pharmaceutical manufacturer Medica of Sandanski. This concerns both their investment in share capital and the EUR1.19MN credit, released by the EBRD, which has been returned. Negotiations between the management of the company's majority shareholder - Doverie United Holding - and the two financial institutions were launched in the beginning of 2002. A sign for the dissolution of relations between them was that Medica's then executive director Richard Voichehovski (proposed for that position by the EBRD in 2000) vacated his post. What remained to be done was to fix the deal's price and it became known on June 7. Then transferrence of EBRD's and ECM's shares (worth about 22% of the enterprise's capital) at BGN14.5 apiece was registered on the Stock Exchange. The majority package - till then owned by Doverie United Holding - was sold out as well. Thus, its subsidiary Doverie Capital already holds 81.88% of Medica. The EBRD and EСМ entered the enterprise in 2002 after buying stocks when its equity capital was raised at BGN22 per share.The credit from the EBRD was paid off by a loan of BGN1.5MN from ROSEXIMBANK. The same financial institution allocated to Medica EUR EUR1.5MN for realization of its investment programme, whose aim is to satisfy the GMP (good manufacturing practice) requirements. Initially, these funds were to be allocated by the EBRD.The pharmaceutical producer's financiers pre-estimate that the company would end the year 2002 by a loss of BGN1,205,000, mostly due to the poor economic situtation and the writing-off of some bad debts. According to Penka Tishkova, Executive Director of Doverie Capital, the enterprise has problems with the Russian market and with the replacement of Medica's former head Voichevski in the beginning of the year.In the next few days Doverie Capital will move to the State Securities Exchange Commission a tender proposal for purchasing Medica's remaining shares. The price is expected within the range of BGN11.50-14.50 apiece. 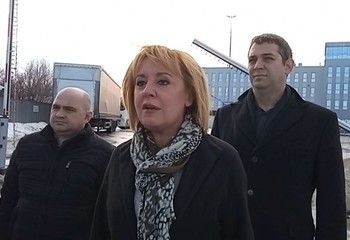