BULGARIAN COSMETICS STEP BACK ONTO THE RUSSIAN MARKET

The Russian Association for Perfumery and Cosmetics (RAPC), incorporating 71 Russian enterprises and manufacturers, has recently accepted as its members two Bulgarian companies - Alen Mak and BRK-Cosmetics. Vladimir Salev, Executive Director of the RAPC, is presenting his observations about the presence of Bulgarian cosmetics and perfumery on the Russian market.Mr. Salev, do you have at your disposal any statistics about the presence of Bulgarian perfumery and cosmetics on the Russian market?- According to official data, Bulgaria was 8th on the list of exporters of perfumery and cosmetic products to Russia in 2001, following Germany, France, Great Britain, Poland, the USA, Belgium, and Italy.But there was a collapse in the sale of Bulgarian products in Russia. What was that due to?- While the Soviet Union existed, 42% of the toothpastes on our market were made in Bulgaria. Regretfully, in the transition period when Russia and Bulgaria took on the road of market development, there came a very painful period for the cosmetic sectors in both countries. Foreign products flooded the Russian market and the existing control system could not cope with this. Products in shiny packings appeared, but the quality of the contents was not in compliance with what was written in the catalogues and the products were often not harmless. There were also some unscrupulous Bulgarian manufacturers among the suppliers of these poor-quality products. Made by primitive equipment in basements and garages and exported illegally to Russia, these products strongly compromised the real Bulgarian brands. Thanks God, this period is over. We have objective observations that we are entering a new stage - the products of leading Bulgarian manufacturers are again finding their clients in Russia.According to the prestigious research company Comcon-Pharma, for example, Bulgarian hair-dyes are rated by consumers in the first ten preferred brands. The same company has also established that the Bulgarian toothpastes Dental and Pomorin (known from Soviet time) are among the brands, preferred by Russian clients. Contemporary Russian consumers also like very much the children's series Alen Mak. The Bulgarian company BRK-Cosmetics was awarded a gold medal at the most-prestigious international exhibition in Eastern Europe - Intercharm-2001, held on the eve of the New Year.Which is the major obstacle for the wide-scale presence of Bulgarian cosmetics on the Russian market?- As I've already said, this is the collapse in the bilateral commercial relations in the beginning of the transition period. That's why we congratulate the idea of the Bulgarian governmental delegation and of our Russian experts and government authorities to set up two or three specialized customs terminals in Russia. They will have to handle quickly but with high exigence the products arriving from Bulgarian enterprises, and establish permanent contacts with the Bulgarian customs terminals. This would ensure transparency of deliveries and intercept the possibility for shady deals. We have asked the Russian Chamber of Commerce and Industry to support this proposal in front of the State Customs Committee. 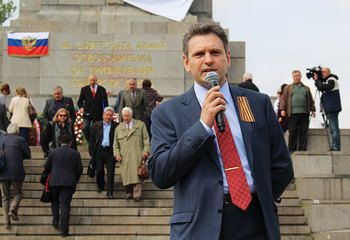