The sum from the sale of DZI's arm Armeetz, will most probably be mechanically taken out of the accounts of the state-owned insurer and will be transferred to the budget. This is the expected end of the negotiations between Privatization Agency (PA) and DZI's candidate-buyer Contract. On July 1 Contract EOOD submitted the only offer for purchase of the state-owned insurer after both Allianz and Czeska Poistovna withdrew from the bidding. All details on the deal are being specified for already a week between PA and the candidate-buyer's management.BGN4.3MN have entered DZI's accounts. This is the price of 93.3% of the capital of Armeetz. The deal was signed three months ago.According to the preliminary announced requirements DZI's candidate-buyer should choose between either transferring the money received for Armeetz to the budget, or increasing his offer for DZI by the amount of the sum paid for the army insurer. Insiders comment that the price of EUR20.5MN offered by Contract EOOD for 80% of the state insurer's capital will probably be fixed as final. At first PA expected to receive at least EUR30-35MN for DZI. Candidate-buyers, however, placed BGN60MN or EUR30MN as their upper limit and even this sum will hardly be reached. In its businessprogram Contract plans to invest in DZI BGN11MN in the next five years and also to preserve the staff of 720 persons. The candidate-buyer's program also pinpoints Interamerican, which is owned by the international group Eureco, as Contract's consultant in DZI's management. Experts inform that presently a program for reorganization of DZI's branch network and employment structure is being discussed which should make them more efficient. For the first five months of 2002 DZI has realized gross premium revenues amounting to BGN8.3MN. As of end-March DZI - General Insurance accounted for BGN26MN in premiums. For Q1 of 2002 the state-owned insurer ranked third after Bulstrad and Allianz Bulgaria and now holds 11.85% of the market. If the negotiations with Contract are successfully finalized in the next couple of weeks, the firm will receive insurer's assets. By end-September 20% of DZI's capital will be put at the stock exchange to be sold against compensation notes. This idea was introduced even at beginning of the previous privatization procedure, but then it foresaw such trading of 30% of DZI's capital. 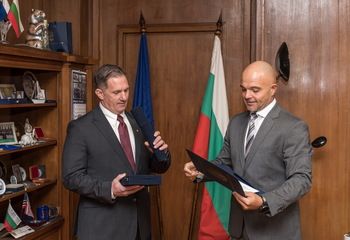